Yesterday's post Bye bye genetic determinism, described a relatively new view on the influence of genes on how we are and become. Briefly, it states that genes are not the simple causal agents of our traits we once thought they were. Instead, genes interact constantly with a multitude of environmental factors. It is not simply the genes, but the genes-environment interaction (GxE) which determines how we are, what we do and how we develop.

One dramatic demonstration of this genes-environment interaction dates back to 1958 when researchers Rod Cooper and John Zubek did an experiment with rats. They worked with two groups of rats: 1) maze-bright rats, rats who had consistently performed well in mazes, 2) maze-dull rats, rats who had consistently performed poorly in mazes. They tested the performance of these rats in three types of environments: 1) impoverished environments with no stimulation whatsoever, 2) normal environments, with ordinary walls and a moderate amount of exercise, and 3) enriched environments with walls painted in bright patterns and many stimulating toys: ramps, mirros, swings, slides, bells, etc. The graph below shows how dramatic the genes-environment interaction effects were (click to enlarge). 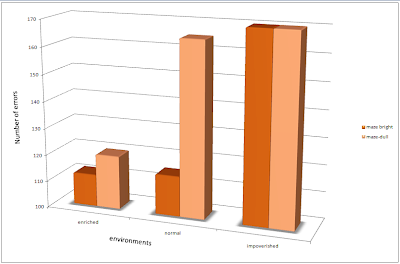