The build up phase

I find one of the most fascinating findings in Jim Collins' classic Good to Great: Why Some Companies Make the Leap... and Others Don't

that, in the spectacularly successful companies he and his team researched, breakthrough success was NOT the result of sudden breakthrough transformations. Instead, it was the result of maintaining  a consistent focus on continued improvements and delivery of results for periods of 10 years or longer. Collins called such a period the build up phase. When suddenly the companies became spectacularly successful, which the outside world could notice clearly, there had not been any magical intervention, turning point, new product launch, new market strategy or drastic process change. The opposite was the case, after years of disciplined focus on incremental change, there was a tipping point and the success suddenly exploded. The following graph illustrates that. 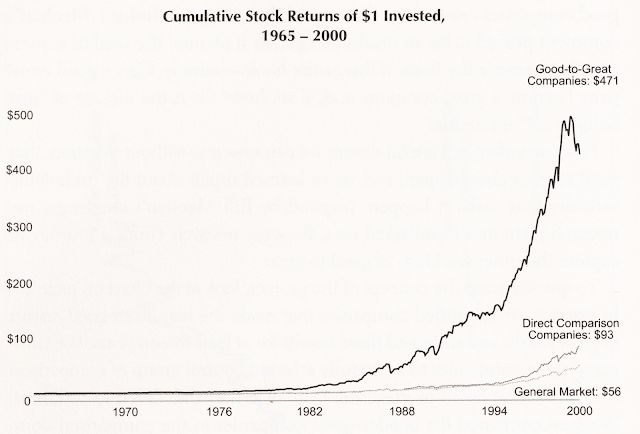 This finding seems important to me. It shows a parallel with how individuals become spectacularly good at something: through many years of deliberate practice (see the work of Anders Ericsson). Looking at the graph of the good-to-great companies it even appears that the companies needed a ten year period (or even longer) to get successful, just like the experts in Ericssons research needed a minimum of ten years to reach the top. It confirms the idea that reaching a position of success is very much a matter of paying continued deliberate effort, year after year after year, both for individuals and for companies.