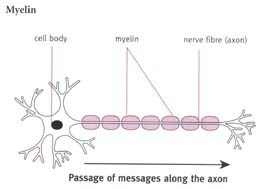 An interesting book I have recently read is The Talent Code: Greatness Isn't Born. It's Grown. Here's How.

by journalist Daniel Coyle. The book is one of the many books that have come out recently that explain that talent is not some mystical fixed power with which you happen to be born with or not. The Talent Code has three main topics: deep practice, ignition and master coaching. Deep practice is a way of attentive practicing which is key to developing skills. The way the author describes deep practice resembles the concept of deliberate practice a lot. Ignition refers to the process and events by which people become motivated to start a process of a long term investment in practicing in order to develop mastery of skills. Master coaching refers to what top coaches do to help their pupils develop their talent.

An intriguing part of the book is where the special role of myelin is described. Myelin, white matter, is the stuff that is wrapped around neurons to insulate them -much like plastic is wrapped around electricity wires- and it accounts for more than half of the brains mass. While scientists have always tended to focus on the importance of neurons and synapses for cognitive functioning, a new appreciating for the crucial role of myelin is now emerging.

The importance of neurons and synapses remains of course high. They largely explain phenomena like analysis, memory, perception, emotion, muscle control etcetera. As Coyle explains: "Our brains are bundles of wires - 100 billion wires called neurons, connected to each other by synapses. Whenever you do something, your brain sends a signal through those chains of nerve fibers to your muscles. [...] The simplest skill -say, a tennis backhand- involves a circuit made up of hundreds of thousands of fibers and synapses."Through practice we can increase the precision and speed of the connections in such circuits. Once we master certain skills they begin to feel natural and it starts to feel as if we have always possessed them.

Before, myelin was mainly studied in relation to diseases like multiple sclerosis. In recent years, scientists have discovered that there is a direct proportional relationship between hours of practice of top performers and white matter. Douglas Fields is the researcher which first described (in 2006) how myelin improves brain functioning. When neurons fire, supporter cells called oligodendrocytes and astrocytes sense the nerve firing and respond by wrapping more myelin on the neuron that fires. The more the nerve fires, the more myelin is wrapped around it and the faster the signal can travel, up to 100 times faster than signals sent through an uninsulated fiber. Apart from the function of increasing signal speed, myelin also has the capacity to regulate signal speed so that signals can even be slowed to reach synapses at the right time.
Author: Coert Visser