Getting unstuck by reframing the problem into less dualistic terms

For instance, I talked to a manager who was dissatisfied with something an employee had done. In the conversation he had about this topic with that employee he had ventilated his dissatisfaction and shown his irritation. The conversation did not go too well. The employee responded defensively and showed irritation too. He had even criticized the manager about his behavior. The manager asked what else he could have done, saying: "I am usually very appreciative but in this situation the employee performed unsatisfactorily, so there was no reason for appreciation. I needed to be firm!"

Implicitly, the manager judged whether this was a situation which asked for appreciation or for firmness. In other words, he asked which would be the right position on the following continuum:

He chose his position on the right hand side of the continuum but he was not satisfied with the conversation. The employee had responded defensively instead of cooperatively. In situations like this it is often useful to reframe the situation as one consisting of two dimensions, instead of one, like this: 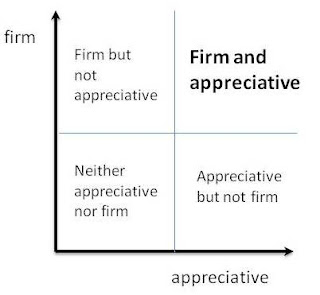 When he had a second conservation he noticed that the employee showed more understanding and was willing to conform to the expectation of the manager.

If you want to know how this simple reframing idea might be applied while using solution-focused scales, read this: The use of scaling question when there are multiple interrelated goals.
Author: Coert Visser