Christine Tomori and Janet Beavin Bavelas have micro-analyzed conversations of four distinguished therapists, client-centered therapists Carl Rogers, and Nathanial Raskin and solution-focused therapists Steve de Shazer and Insoo Kim Berg (read their article). Micro-analysis is interesting because it does not focus on the theories or assumptions behind models but it shows you what practitioners actually do in conversations with their clients. One of the things Tomori and Bavelas compared is the occurance of negative and positive expressions by the four therapists. They found the solution-focused therapists use much more positive and much less negative expressions (see figure below and click on table above left for details). 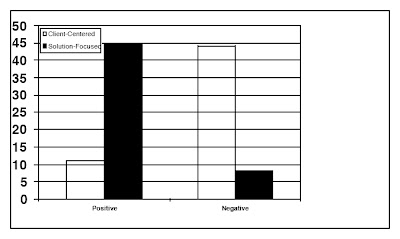 This does remind of the positive-negative ratio research that has been done in the past decade:

"Over the past decade, scientists have explored the impact of positive-to-negative interaction ratios in our work and personal life. They have found that this ratio can be used to predict—with remarkable accuracy—everything from workplace performance to divorce. This work began with noted psychologist John Gottman's exploration of positive-to-negative ratios in marriages. Using a 5:1 ratio, which Gottman dubbed "the magic ratio," he and his colleagues predicted whether 700 newlywed couples would stay together or divorce by scoring their positive and negative interactions in one 15-minute conversation between each husband and wife. Ten years later, the follow-up revealed that they had predicted divorce with 94 percent accuracy. " (source)
Also read: Using the client's exact words