We all stand on each other's shoulders 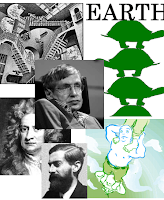 "We all stand on each other's shoulders", I once replied when a solution-focused colleague complimented me with something I'd written. This was my admittedly strange way of expressing something like that we all build on each other's work and (hopefully) collectively progress our thinking. I was of course making a variation on the metaphor of the dwarf standing on the shoulder of a giant which Isaac Newton used (but not invented; it is attributed to Bernard of Chartres, who lived in the twelfth century). When I had made that strange expression my colleague appreciatively replied: "It shows you're from the country of Escher. M.C. Escher was, of course, the famous Dutch graphic artist known for his lithographs and woodcuts of impossible realities. Well-known examples are Drawing hands, Sky and Water, and Ascending and Descending.
Yesterday, when I posted my 'we all stand on each other's shoulders remark I got two interesting comments. One was from my solution-focused friend Paolo Terni who said: "And I hope somebody is standing on solid ground, somewhere! :)", which is a nice example of his wits. The other was from another solution-focused friend, Kirsten Dierolf, who replied to Paolo: "Nope. It's turtles all the way down...". She refers to a the opening anecdote in Stephen Hawking's book A Brief History of Time: A well-known scientist (some say it was Bertrand Russell) once gave a public lecture on astronomy. He described how the earth orbits around the sun and how the sun, in turn, orbits around the center of a vast collection of stars called our galaxy. At the end of the lecture, a little old lady at the back of the room got up and said: "What you have told us is rubbish. The world is really a flat plate supported on the back of a giant tortoise." The scientist gave a superior smile before replying, "What is the tortoise standing on?" "You're very clever, young man, very clever," said the old lady. "But it is turtles all the way down!"
Author: Coert Visser