The steady decline of violence in the world 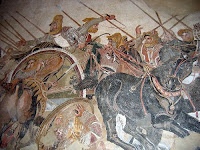 In this post, Seeing our predicament as a problem that can be solved, Steven Pinker is quoted who says that the processes of enlightenment and reason will continue to drive violence down. Also, here is a post, What have we done right?, in which Pinker's TED 2007 on that subject in mentioned. Pinker has now written an interesting article, Why is There Peace?, in which he shows that the common belief that our times show unpredecented violence is completely wrong. Using historic evidence, he shows how the opposite is true: step by step the use of violence in the world is declining. Pinker offers some explanation why many believe the opposite to be the case. Also he provides some different hypotheses for the reasons violence is constantly declining. Finally, he warns against complacency and urges us to understand what makes peace possible.


Why is there peace?
By Steven Pinker

Over the past century, violent images from World War II concentration camps, Cambodia, Rwanda, Darfur, Iraq, and many other times and places have been seared into our collective consciousness. These images have led to a common belief that technology, centralized nation-states, and modern values have brought about unprecedented violence. Our seemingly troubled times are routinely contrasted with idyllic images of hunter-gatherer societies, which allegedly lived in a state of harmony with nature and each other. The doctrine of the noble savage—the idea that humans are peaceable by nature and corrupted by modern institutions—pops up frequently in the writing of public intellectuals like, for example, Spanish philosopher José Ortega y Gasset, who argued that "war is not an instinct but an invention." But now that social scientists have started to count bodies in different historical periods, they have discovered that the romantic theory gets it backward: Far from causing us to become more violent, something in modernity and its cultural institutions has made us nobler. In fact, our ancestors were far more violent than we are today. Indeed, violence has been in decline over long stretches of history, and today we are probably living in the most peaceful moment of our species' time on earth. Read the article here.

Also read: Everything will improve