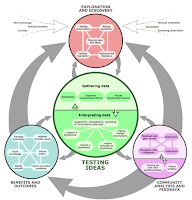 Some of the confusion of lately about whether Evolution is 'just a theory' or if it is factual has to do with a general misunderstanding of what science is. Some time ago, I quoted Derren Brown who said this about that: "Science is unusual in that it is cumulative. It is a system built over time, wherein useful information is retained and ideas that simply don´t stand up are discarded, based on the confirmation of knowledge through testing. Science, like technology, is inherently progressive and by definition represents the model that can be shown to work best. ... [w]e live in a time when misguided aspects of relativist thinking are still around us and unscientific, scaremongering stories are popular with the media. Scientists are painted as the corrupt hacks of evil big business, and as proper thought is too easily drowned beneath waves of misinformed public feeling, we often forget the importance of evidence-based fact."

Now, there is a new initiative which can help to enhance general understanding of what science is: a website called Understanding Science. Here are some key points about science: