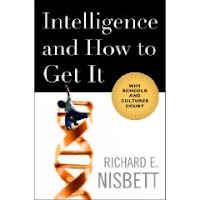 Did you read the 1996 book Bell Curve: Intelligence and Class Structure in American Life (A Free Press Paperbacks Book)

by psychologist Dick Nisbett. You will probably like this book because it will provide answers to your questions. Not in a vague way but in a very specific, well reasoned and research based way. Here are some conclusions from the book:


This book is great. I think it is as interesting as books like Carol Dweck's Mindset: The New Psychology of Success

. Let's hope the book will inspire many parents, educators, policymakers and scientists. It just might ...
Author: Coert Visser