The most powerful idea in science 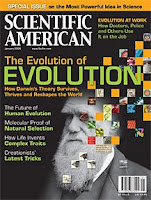 Scientific American has a special issue out on Evolution, which it calls the most powerful idea in science. The issue is, of course, full of information on the history of the theory of evolution and its recent developments and on its originator, Charles Darwin. As an appetizer, here are just a few quotes from the issue:
Author: Coert Visser