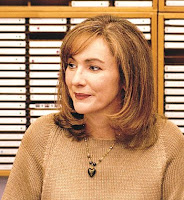 Norman Doidge's book The Brain That Changes Itself: Stories of Personal Triumph from the Frontiers of Brain Science (James H. Silberman Books)

contains a fascinating chapter on a woman called Barbara Arrowsmith Young. As a child, she suffered from asymmetry in her brain which meant that she had both exceptional abilities (like her auditory and visual memory and a great drive) and signs of retardation and an asymmetric body. She had serious difficulties in the following areas: pronouncing words, spatial reasoning, kinesthetic perception, span of vision. She had trouble understanding grammar, math concepts, logic, and cause and effect and she behave odd socially because of her trouble understanding cause and effect relationships. Her emotional development suffered and she had few friends. She felt like living in a fog.

During here school period she followed a strategy of working around her disabilities. She learned to use her memory to cover her deficits and with lots of practice she could remember large amounts of facts. She did not understand the relationships between the facts, so each time she took tests she would pray they would be facts based. Her teacher told her parents she would never be able to learn normally. After high school she was accepted into a graduate study of child development.

At age 28, she came across an article by Mark Rosenzweig in which she read that rats which had been in stimulating environments had bigger and healthier brains. From then on, she realized that brains could be modified. She started to a program of exercises for herself which were not aimed at working around her weaknesses (the so-called compensation strategy) but which were directly aimed at strengthening her weaknesses. For instance, she taught herself to tell time from a clock by tirelessly practicing it. After many weeks, she only managed to tell the time, but she also began for the first time to understand a bit about grammar, logic and math. Encouraged by her success she developed lots of exercises.

In 1980, she cofounded the Arrowsmith School in Toronto, specialized in providing exercises to children and adults with learning disorders.

Also read: The Woman Who Fixed Her Own Brain / Building Herself a Better Brain / Brain Building / Arrowsmith Approach Is To Correct Learning Disabilities / The development of Charles Darwin's mind
Author: Coert Visser