Do you know Rubin's vase? Edgar Rubin was a Danish psychologist who made a series of pictures among which was the famous ambiguous picture which could be either interpreted as a vase or as two faces, depending on how you looked at it (see the picture on the right). This picture is often used to illustrated how what we perceive often critically depends on the perspective we take.
I have now come across a beautiful and slightly more complex variation on Rubin's picture. I found it on this site. Here it is: 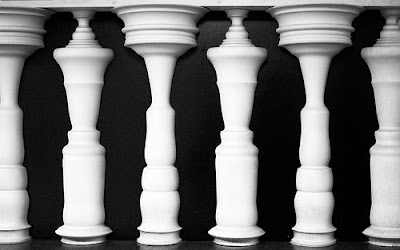