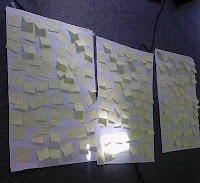 The solution-focused principle which was the topic of this post came in handy for me about a week ago. During a workshop on solution-focused coaching I started with an exercise in which I invited participants to exchange in a few minutes with their neighbor a recent experience that had been fulfilling and sparkling to them. It was a large group; about 70 people (working as mentors in schools). Within a matter of seconds the room filled with a cozy sound of chatter which was very pleasant to listen to. People were enthusiastically telling and asking each other about these good moments.

Suddenly I noticed that two gentlemen in the front of the room were just sitting there with their arms folded. They did not talk with each other and looked straight ahead. In a reflex I interpreted their behavior as meaning something like: "I am certainly not going to do this childish rubbish exercise... no way!" For a second or two I wanted to go to them and ask or tell them something. But, just in time, I remembered this and this and I decided to wait and to give them time and room to do and leave what they thought best. Then, I focused again on the rest of the large group and suddenly I could hear the cozy chatter again. After the exercise was over we proceeded with the workshop. One of the two men asked a few questions with a critical undertone rather at the beginning of the workshop. After that I have not really noticed them much.

At the end of the workshop many participants were very enthusiastic. The lady who had organized the meeting walked up to me with a smile. She said: "Did you notice that man in the front, who looked so negative? Well, he came up to me and he said: "I never thought I'd say this.... but I am actually going to try this stuff!"
Author: Coert Visser