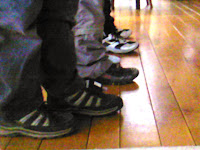 In an earlier post I mentioned scales. A neat application of working with scales is scalewalking, an exercise I once learned from the English solution-focused trainer Paul Z. Jackson. Scalewalking can be done with only one person but is also very suitable for use in groups, small and large (I have done this exercise with groups up to 70 people). This is how it goes:

You ask the members of the group to imagine that one side of the room represents 0, the other side represents 10. The position in the middle of the room you call N.
You ask the participants to think about where they now are on the scale. They don’t have to mention their current position on the scale. Instead, you ask them to think of their current position on the scale as N. Then, you ask all participants to come and stand in a line at position N. (The interesting thing about working with the N position is that it creates security for all involved. There will be no awkward discussions about who is where on the scale).

While they stand on the line N, you ask them to look back at the 0 position and you ask them how they have managed to go from 0 to where they are now. You give them some time to think and then you may ask one or two people how they did it. Then, you ask all participants to turn around and look at position 10. You invite them to come and stand at position 10 for a while and you ask them to visualize what will be different at 10 and what would be possible for them when they will have arrived there. You ask one or two people to tell to the group what will be different for them at 10. Then, you ask everybody to come and stand at their current position N again and you ask them to think of one small step forward they may take tomorrow. They don’t have to mention what the step is. Instead, you invite them to physically take a step forward as a sign to you and the group that they have found the small step forward for themselves. Then, of course, you invite everyone to take that small step tomorrow.

There are several interesting things about scale walking with a group. One thing that is interesting about it is that due to the lively character of the exercise it is usually energizing and stimulating to do this. It is also a very flexible exercise. You may apply it in situations in which all participants only have individual goals. In this case, the scales may have nothing to do with the scales of the other participants. But it is also possible to work with a common theme so that the scale will be a group scale (for instance increasing customer satisfaction). In this case, the exercise will lead to a situation in which all participants will think up a small step forward in the direction of a common goal.
Author: Coert Visser