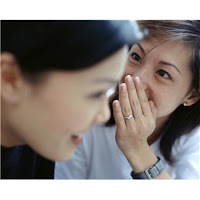 Robert is a team manager who gets a new member in his team. This new team member, Diana, has been transferred from her previous department by the general manager after she had a serious conflict. Just after Diana has started working at Robert's department  Robert gets a visit from the general manager. He warns Robert: "Diana is a problem. She is very negative. I think this position really is her last chance. There is no room at our company for people who can only be negative."

Robert is a bit surprised by this message. He has known Diana for some time and is impressed by her commitment and her critical abilities. For a moment he considers defending Diana but he does not. Instead he says: "Thank you for letting me know this. What would you think if you and me would sit down after a few months and evaluate Diana´s performance?" The general manager thinks this is an excellent idea. After some time Diana performs very well in Robert´s team, just like he expected. She is appreciated for her sharp mindedness and involvement and she has more than once kept colleagues from making mistakes.

Robert considers letting the general manager know about this but he realizes that the general manager is someone who is not easily convinced. Because of that he decides to follow a different approach. He begins spreading positive rumors about Diana. Rumors that are completely true, however, about how well she fits into the team, how engaged she is, and so forth. Robert trusts that it will be just a matter of time before the general manager gets the word.

And indeed ... Already within some weeks, the general manager comes up to Robert and says with a surprised smile: "I am hearing some good things about Diana." For a moment Robert feels like saying: "Told you so! This is just what I could have told you!", but he does not. The general manager continues: "I think that your team is a much better place for her. Robert nods and says: "Thanks for your intervention. I think this has helped to bring out the best in Diana." Robert realized there are three winners in this process.
Author: Coert Visser